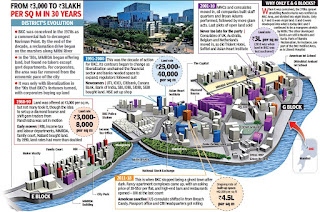 Looking at Bandra Kurla Complex today, it is difficult to imagine that just 30 years ago, land was available there at a throwaway price of Rs.3,000 per square metre, or just Rs.300 per square feet. Astonishingly, and to its consternation, Mumbai Metropolitan Region Development Authority, the special planning authority for BKC, found that there weren’t many takers for its offer.

MMRDA had spent the decade leading up to 1980—the year it started selling plots at BKC—preparing the ground for buildings to come up on a sliver of marshy land between Bandra and Kurla along Mithi River. Much effort and money had gone into reclamation and land compaction. The government came in for much flak from experts, who decried politicians upstaging planners to decide the city’s future. After all, BKC was conceptualized by the state, specifically former chief minister Sharad Pawar, as one of the alternatives to Nariman Point and SoBo in general. Across the creek, Navi Mumbai was coming up under the supervision of the newly created City and Industrial Development Corporation, or Cidco. Within Mumbai, it was going to be BKC.

“Not many corporates were willing to move out of south Mumbai to a former swamp with little by way of connectivity,” said Sulakshana Mahajan, an expert on urban issues. “That’s because politicians and not planners decide Mumbai’s destiny.” But as the 90s approached, the price of land at BKC gradually inched up to Rs.6,000, and then to Rs.8,000 per sq metre. It was finally liberalisation that changed BKC’s fortunes. “Suddenly, banks started looking for places other than South Mumbai to set up offices. When MMRDA planned its first auction, the reserve price was fixed at Rs.25,000 per sq metre, but it quickly went up to Rs.40,000,” said Dilip Kawathkar, joint project director, MMRDA.

BKC really took off in the new millennium. By the end of the noughties, the diamond bourse had opened, as had consulates of UK, Australia, Belgium and the Netherlands. A few years later, the American consulate shifted base from Breach Candy. This was perhaps BKC’s crowning glory. After all, nothing quite screams upmarket like Western diplomatic missions.

The last land auction at BKC occurred towards the end of the noughties. By then, the price of land there had shot to almost Rs.3.5 lakh per sq metre. To meet increasing demand, MMRDA increased BKC’s FSI from 2 to 4 for commercial plots and from 1.5 to 3 for residential plots. Seventy plots have been leased to commercial entities and 12 for residential buildings, the lease period being 80 years. The money raised is meant to be used for developing infrastructure in the Mumbai Metropolitan Region. In a few years, MMRDA’s annual budget has grown from Rs.3,000 crore to Rs.10,000 crore (for the 2017-18 financial year). It has earned reserves of Rs.17,000 crore, a significant contribution coming from BKC land sales.

Not that there aren’t any negatives about BKC. A significant drawback continues to be poor connectivity, despite the complex’s central location and proximity to three prominent suburban railway stations—Bandra, Kurla and Sion. “Within BKC, it is easy to move, but to get to BKC is an onerous task,” said Mahajan. “Bus services to this busy business hub are inadequate. People have to wait for hours to get a bus. The Kurla bridge took years to be built as did the Santacruz-Chembur Link Road.” Not to mention that access roads to BKC are heaving with traffic round the clock.

Nevertheless, transport challenges do not seem to have deterred banks and corporates from operating out of the city’s newest finance district. “Last year we carried out a survey for applying for special economic zone status for the International Finance Service Centre. The average salary in BKC is Rs.3 lakh per month. Currently, two lakh people work here and it has a capacity to accommodate another two lakh workers,” said a senior official from MMRDA’s town and country planning department.

For the time being, all eyes are on the completion of the Metro rail project. The BKC stop will be an interchange between what will go on to be two of the busiest corridors.

The International Financial Service Centre is supposed to be the last mega project at BKC, which has exhausted its land bank for development.

Though the state government is keen on the prestigious project, its fate will be decided by the Centre, which for the time being is not inclined to granting it. The Centre has told Maharashtra in no uncertain terms that Gujarat’s GIFT City—a pet project of Prime Minister Narendra Modi—must be settled first, only after which would an IFSC in Mumbai be considered.

Mumbai, the country’s financial capital, was the natural choice for the IFSC. In 2005, the then finance minister P Chidambaram even set up a committee under former World Bank economist Percy Mistry for a study. But with no headway on permissions, legal requirements, and infrastructure, the proposal was pushed on the backburner.

The latest proposal, mooted by the Devendra Fadnavis government, is for the IFSC to come up at BKC’s G-Text block (adjoining G block and earlier earmarked for the textile industry), and not as a standalone structure, but to include an underground bullet train terminus, an underground Metro station (line 3) and an overground Metro station (line 2B). The plan is also to make it a go-to place for high street fashion.

The state government gave its approval, and last year the proposal was sent to the Centre for its approval. But the IFSC faces an uncertain future. “The Maharashtra government’s view is that an IFSC in Mumbai can coexist with a similar facility in Gujarat, and in fact, be complimentary to each other. Mumbai could be the front-end and Gujarat the back-end,” said finance secretary and former MMRDA commissioner UPS Madan, who did the initial groundwork for the IFSC. “There is also a plan to connect the two cities (Mumbai and GIFT) through the bullet train. We have sent a proposal to the Centre on this,” he added.

An exhibition-cum-convention centre is also being built at BKC by Reliance Industries Limited. The project, however, has been delayed and run into legal hassles. After the IFSC what remains will be around 35 hectares. “This balance land will be used for parking and some residential projects,” said R A Rajeev, current metropolitan commissioner.