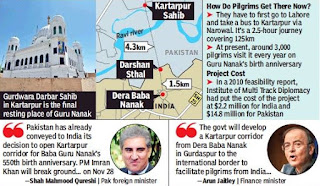 Two months after a bid by the new government in Pakistan to restart talks with India failed, the two countries seem to be on the verge of a breakthrough by agreeing on a Kartarpur corridor after the Modi government approved a road on its side of the border.

With the Cabinet approving the development of a corridor to enable smooth passage of pilgrims seeking to visit Guru Nanak’s final resting place at Kartarpur across the border, India “approached and urged” Islamabad to develop the passage on its side too so as to facilitate unrestricted flow of devotees.

The corridor on the Indian side will begin from Dera Baba Nanak in Gurdaspur to the international border with Pakistan. The Gurdwara Darbar Sahib Kartarpur is located across the border on the banks of the Ravi.

Pakistan foreign minister Shah Mahmood Qureshi responded to India’s announcement by tweeting that Islamabad has already conveyed to India its decision to open the corridor for Guru Nanak’s 550th birth anniversary in 2019 and that PM Imran Khan would do the groundbreaking for facilities at Kartarpur on November 28.

India’s decision to build the corridor was announced by finance minister Arun Jaitley on the eve of Gurpurab, or Guru Nanak Jayanti. It came a day after Pakistan media reported that Islamabad was going to build a 2.5-km corridor leading to Kartarpur Sahib in its territory and that Khan himself would lay the foundation stone next week.

Indian government sources said the Cabinet passed the resolution after many weeks of consultations. The move to build a corridor will also serve to test the commitment of the Pakistani side, which, despite suggestions that a corridor was in the works, had not moved on the project.