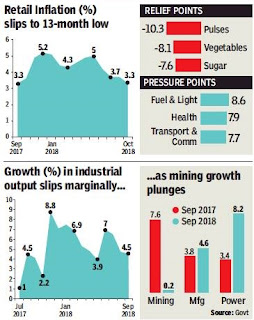 Retail inflation cooled to a 13-month low in October on the back of easing food prices, while industrial output growth remained steady in September due to robust electricity, infrastructure and construction goods, capital goods and consumer durables segments.

Inflation, measured by the consumer price index, rose an annual 3.3%, slower than previous month’s 3.7% and lower than 3.6% in October 2017. The food index contracted 0.9% during the month. Rural inflation moderated to 2.8% in October, while urban inflation remained higher at 3.9%.

Economists said the RBI is expected to hold rates when it reviews monetary policy next month. Retail inflation has remained below the central bank’s target for three consecutive months and softening in global crude prices, if sustained, may help the inflation trajectory in the months ahead.