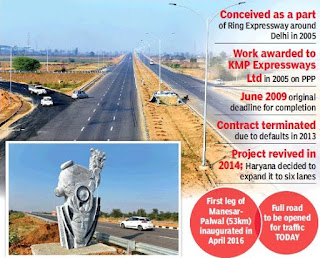 Finally, Delhi will get a ‘Ring Expressway’ that will work as a bypass for vehicles not destined for the national capital. Almost 15 years after it was first conceived, the Kundli-Manesar-Palwal stretch, also known as Western Peripheral Expressway, will open for traffic and bring down travel time from Sonipat to Manesar to about 45 minutes on this signal free corridor.

The 83-km Sonipat-Manesar stretch was the last leg of the peripheral expressways, with a combined length of 270 km, to be completed to make the entire corridor seamless. The Eastern Peripheral Expressway was opened in May and, together with the WPE, will decongest Delhi and take 50,000 vehicles off the capital’s roads.

The expressways will not only help vehicles travel from one part of the country to another without entering Delhi and congesting its roads, the links from the expressways to different state and national highways will improve traffic flow in the NCR.

The completion of the entire network comes at a time when the environment watchdog and government authorities are mulling drastic options to cut vehicular traffic on Delhi, roads including a ban on diesel vehicles on days when air quality becomes severe.

Though the WPE was originally designed as a four-lane expressway with limited access, Haryana government decided to make it a six-lane one on a par with the EPE after taking over the work from the earlier concessionaire, KMP Expressway Ltd. While the EPE built by National Highways Authority of India is a concrete road, the WPE has used bitumen for surfacing.

Cars can travel at a maximum speed of 120 kmph on the WPE. Like the EPE, the WPE has closed tolling system, which means commuters will pay for the distance they travel. Toll plazas have been built at every entry and exit point. Work on all interchanges have been completed for smooth entry and exit of vehicles.

Toll charges on both expressways will be 25% more than that on national highways. Parity in charges was brought after several controversies during the UPA government so that commuters have the option of choosing which road they want to take to bypass Delhi. Both expressways take off from Kundli in Sonipat and end at Palwal in Faridabad.