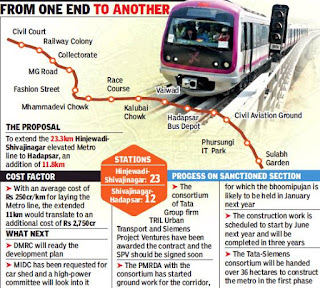 The PMRDA has proposed to extend the 23 km Hinjewadi-Shivajinagar Metro line till Hadapsar, for which the chief minister’s nod is expected in the next month. “In view of the increasing citizens’ demand for connecting the two industrial hubs, Hinjewadi and Hadapsar, we have decided to extend the Metro line. The elevated Metro line up to Hadapsar was initially proposed by the Delhi Metro Rail Corporation in their survey. We have decided to implement it as per the passenger survey and feasibility,” PMRDA commissioner Kiran Gitte said.

The Pune Metropolitan Region Development Authority expects the chief minister Devendra Fadnavis, who is also the PMRDA chief, to formally approve the proposal in the next month. “The Delhi Metro Rail Corporation (DMRC) is preparing a detailed project report (DPR) for it,” Gitte said.

On April 26 this year, the PMRDA resolved to prepare the DPR of the extended 11.8 km Metro line from Shivajinagar to Hadapsar. “The entire project should be commissioned and put to service within the next four years. While the present Hinjewadi-Shivajinagar line will have 23 stations, there will be additional 12 stations between Shivajinagar and Hadapsar. The integration of the other two metro lines being implemented by the Maha-Metro will be at the Shivajinagar Civil court,” a PMRDA official said.

The PMRDA has handed out 4.7 hectare in Balewadi for commercial monetization to the bidder so that the proceeds can be utilized for the project. While another 18 hectare was given in Mann, of which 30% has been allowed for monetization, while the remaining 70% has been earmarked typically for car maintenance. “Another shed is expected to come up at Hadapsar and talks are on with the MIDC,” the official added.

Presently, the PMRDA is conducting geo-technical investigation at several locations along the existing route, among other surveys. For the entire process 57 cars will be utilized for the entire route as initially only six cars with three coaches were planned. “We have planned three cars that will operate every 2.5 minutes and will cater to 30,000 passengers in one direction in an hour” the official said.