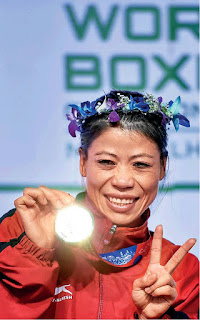 All of India shook to “Maaaaryy, Maaary!” as a doughty 35-year-old punched her way to boxing immortality on Saturday. By claiming her sixth world title, Mary Kom became the most successful woman boxer in history. She beat Ukraine’s Hanna Okhota, 22, in a unanimous 5-0 verdict in the 48 kg category summit bout. The mother of three had won her maiden gold at the Worlds as far back as 2002.

Later, between tears, Mary Kom said she had fulfilled her duty. “After winning, she just lay down, weight of the world lifted from her shoulders,” said Indian team coach Raffaele Bergamasco. “For me, she is the Maradona of boxing,” he added. No one had asked her to push herself beyond limits to do this. But then Mary Kom is as stubborn as they come. “I used to tease her, ‘How will such a slightly built girl learn boxing? She would howl and I’d relent. Today, she’s a six-time world champion. Unbelievable!” said Ibomcha Singh, her childhood coach.