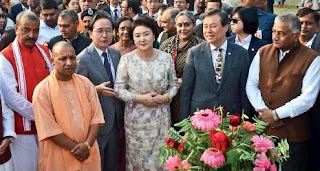 UP chief minister Yogi Adityanath rechristened Faizabad district after Ram’s Ayodhya—a move seen as meant to compensate for the delay in the construction of the temple and thicken the saffron coating on the BJP’s plans for next year’s Lok Sabha polls.

The chief minister also announced the setting up of a new airport to be named after Ram and a medical college in the name of his father, Dashrath, in Ayodhya district. So far, Ayodhya has been a town in Faizabad district. The Yogi government had given a peep into its plan last year when it upgraded Faizabad municipal board to a municipal corporation and named it Ayodhya Municipal Corporation.

Yogi scaled up the Deepawali celebrations in the city. He said he has more plans for the city, especially one for cleaning up Saryu river. “Every time I come to Ayodhya, the seers say that the drains falling into the Saryu should be stopped. Under Namami Gange, money has been sanctioned to ensure that drains in Faizabad and Ayodhya will not fall into Saryu,” he said.

“We want to develop Ramji’s Paidi on the lines of Hariji’s Paidi in Haridwar. Along with developing Ramji’s Paidi, we are also carrying out other programmes. In the coming days, Ayodhya will be developed even further. We are also making a new medical college. It will be named after Raja Dashrath. We are also making an airport here. It will be named after Maryada Purushottam Bhagwan Ram,” he said.

Lord Ram loomed larger over the Deepotsav celebrations the Yogi government launched last year. The PM was present at the Queen Hu memorial where Korean First Lady laid the foundation of a grand memorial for the Queen of Korea who, according to legend, belonged to Ayodhya.

PM Narendra Modi tweeted: “It is a matter of immense joy and pride that Mrs. Kim Jungsook, First Lady of the Republic of Korea visited Ayodhya and also wore traditional Indian clothing. The people of India deeply appreciate this gesture. @moonriver365.” “Ayodhya and South Korea have an ancient link. This link forms the cornerstone of historical and civilisational bonds between India and the Republic of Korea. @moonriver365,” he said.