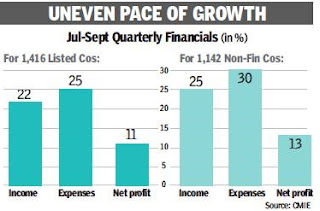 A growth rate of 21.5% in the top line of over 1,400 listed companies that have declared their second quarter Q2 results for fiscal 2018-19 is seen as a reflection of improved demand in the Indian economy. However, this demand is not strong enough to give corporates pricing power, as seen by the slower 10.5% growth in their overall net profits. Margins are shrinking on the back of higher input costs, partly due to a weaker rupee and higher crude oil prices, translating into 24.9% expenditure growth.

Sales growth, at 27%, was higher than estimates for 28 out of the top-50 companies — that have announced their results so far in Q2 — in the National Stock Exchange’s Nifty Index. However, earnings before interest, taxes, depreciation and amortisation (ebitda) was lower at 14.1% and net profit growth even lower at 9%. Higher commodity and raw material prices have taken a toll on profit margins, especially for sectors such as airline services, aluminium, cement, oil and natural gas. The ability to pass on price hikes is limited due to competitive pressures for airlines, cement and FMCG companies, further accentuating the pressure on profit margins.

If private banks were excluded, sales of 28 of the 50 Nifty firms have grown by 27.2%, while ebitda was up 14.5% and profit growth was lower at 8.5%. While the actual sales growth has been higher than market expectation of 24%, the estimates of 12.7% growth in net profit was much higher than what turned out. Domestic brokerage house Motilal Oswal Securities has cut its Nifty earnings per share estimates for FY19 by 2.1% to Rs.528.

In the oil and gas sector, only Reliance Industries and Bharat Petroleum Corp have reported their numbers so far for Q2. Both have reported a sequential contraction in refining margins.

Consumer-facing companies reported a mixed set of numbers. Within financial services, private banks continued to report steady trends in loan growth, but their performance on the profit margin front has been mixed. NBFCs posted another quarter of healthy core performance, even as concerns around growth and profit margins have surfaced, given the underlying context of tight liquidity and rising cost of funds. Automobile companies marginally exceeded profit estimates.

For the information technology sector, the seasonal strength of Q2 manifested across top-tier firms. The revenue performance was patchy for tier II firms with several companies missing expectations.  Cost pressures continued to drag down the profitability of cement companies, even as volume growth remained in line with expectations.