PM promises loans for small businesses in less than 1 hour 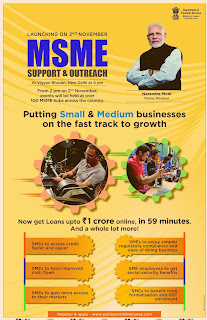 PM Narendra Modi unveiled a 12-point action plan for micro, small and medium enterprises—including subsidised loans, higher procurement and easier labour and green rules —as he sought to address the concerns of small businesses, many of whom have been critical of demonetisation and the goods and services tax.

The outreach comes against the backdrop of a credit crunch, sluggish manufacturing activity and increased competition from imports, especially from China. The announcements have political implications, too, as the Centre looks to counter opposition attacks that jobs have not grown, ahead of the state and 2019 Lok Sabha elections.

In this age of globalisation, the 12-point action plan will strengthen micro, small and medium enterprises and help write a new chapter for them,” Modi said, announcing the measures he described as “Diwali gifts” for the sector, which is the largest employer after farming.

In the action plan, the provision for a 2% interest subsidy for new or incremental loans of up to Rs.1 crore taken by MSME units through a new portal that promises to approve loans in 59 minutes is seen to be most significant. There will be an additional 2% subsidy for small exporters for pre- and post-shipment credit, the PM announced in what was seen as an attempt to boost exports and bridge the current account deficit to ease pressure on the rupee that has depreciated around 15% in 2018.

The subsidy — which came with steps to ease cash flow due to payments held up with large buyers — is seen as a move to address credit woes of small businesses that have been adversely impacted by the liquidity crunch in the system after IL&FS defaulted on repayment and banks and mutual funds became wary of lending to the sector.

Apart from credit, the bouquet of steps focused on enhanced market access for which the government has decided to tap public sector companies and government departments. As part of the scheme, PSUs have been asked to procure 25% of their goods from small enterprises, instead of 20% at present, with a new quota of 3% purchases introduced for women entrepreneurs. Similarly, Modi asked all state-run firms to register on the government e-marketplace, or GeM, the online procurement platform for government agencies, and also get their vendors to register.