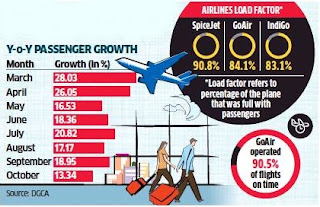 Domestic air traffic growth during October slowed down a bit, registering a growth of about 13.34% from a year ago, data released by the aviation regulator showed. The data, released by the Directorate General of Civil Aviation (DGCA) on Monday, showed that Indian carriers carried 11.8 million passengers during the month, up from 10.5 million in October last year.

Travel industry insiders said that the growth in October this year has slowed down due to the higher base effect of last year.

A larger number travelled in October last year, as Diwali fell in the same month.

As a result, all key scheduled carriers reported lower load factors than the past month but flew their planes with close to 80% of their seats full. Gurgaon-based SpiceJet continued to maintain its pole position in terms of load factor by flying its planes 90.8% full, followed by GoAir, which flew its planes with 84.1%, and IndiGo that flew with 83.1% seats full. SpiceJet said that they have been reporting highest load factors for the past 43 months.

“This is the 43rd month-in-a-row that we have flown with the highest loads in India. This has set a new benchmark in global aviation and we are proud of that. We at SpiceJet make every effort to offer our customers a top-notch experience every time they fly with us,” said Shilpa Bhatia, chief sales and revenue officer, Spice-Jet, in a statement to the media.