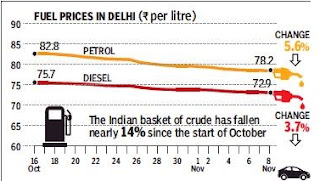 Oil prices fell to multi-month lows as global supply increased and investors worried about the impact on fuel demand of lower economic growth and trade disputes.

The softening in global crude prices is good news for policy makers as well as consumers in India. The easing globally has led to a cut in prices of petrol and diesel prices at the retail level.

The sustained rise in global crude oil prices pushed up retail fuel prices to a record high and piled pressure on the government, which was forced to reduce taxes, while several BJP-led state governments lowered VAT to cushion consumers.

The US government’s decision to allow India to import oil from Iran, despite sanctions, has also helped and the softening in prices will usher in stability on other macroeconomic parameters. It will calm inflationary pressures.

The cost of crude for Indian refiners has dropped nearly 14% since the start of October but the gains have been swamped by a weaker rupee, resulting in lower reduction in petrol and diesel prices, despite more than 20 cuts in pump prices so far.

Benchmark Brent crude fell below $70 a barrel for the first time since early April, down more than 18% since reaching four-year highs at the beginning of October. 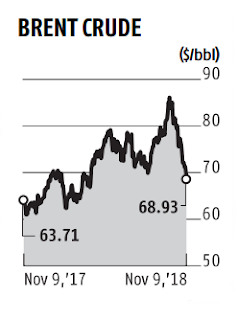