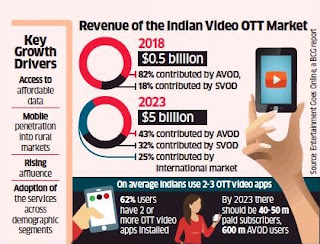 Access to affordable data, mobile penetration into rural markets, rising affluence and adoption of the services across demographic segments including women and older generations are some of the key drivers that will help the Indian over-the-top industry to unlock its potential and reach a market size of $5 billion (₹35,730 crore) by 2023, a latest Boston Consulting Group study found.

The OTT content market in India is at an inflection point, BCG said in a report, titled ‘Entertainment Goes Online’. And, while there are various business models, including SVOD (subscription-based platforms), AVOD (advertising-based platforms) and TVOD (transaction-based platforms), the market is still at a nascent stage with lots of promise, it said. There are over 30 OTT apps and the study shows that over 80% of users don’t use more than three apps, so breaking from the clutter becomes the biggest challenge. But what we are seeing is that consumers are lapping up to the medium, and while India is a price-sensitive market, many of the consumers are willing to pay, if they see value. Even as the market is largely advertising-led, consumers are willing to pay as well, the report pointed out.

Incidentally, rural India will play a big role in OTT consumption. The report said that 48% of India’s Internet users (about 650 million by 2023) are expected to be from rural areas.

Additionally, with development of regional content by various players, the rural market is poised to become a significantly large opportunity. OTT, which is riding the wave of increased data consumption and Internet access in rural India, has opened a new distribution channel that is viable for regional and niche content.

The report also noted that OTT players with Indian content had the potential to tap into the international markets too, where there was a large diaspora paying higher average fees for content.

However, a big challenge will always be the stickiness on the platform, for which OTT players will not only have to invest in content, but also in marketing as well as subscriber acquisition and retention strategy.