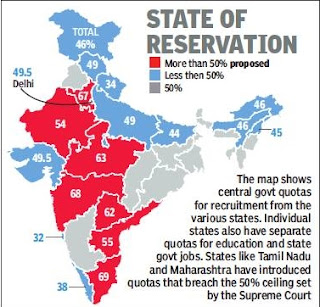 In a judgment which brings into question the post-Mandal judicial firewall against quotas exceeding a 50% ceiling, the Bombay high court upheld Maharashtra’s Maratha reservation policy, which takes the total quantum of quota in the state to 70%.

A bench of Justices Ranjit More and Bharati Dangre upheld the constitutional validity of the Maratha reservation, a matter of prolonged discord and political debate in the state. The only change the court made to the state government policy was to pare the quota from 16% to 12% in education and to 13% in jobs. It was, however, a minor change as jubilation among Maratha groups and the state government indicates. With this, reservation in Maharashtra stands at 70%, including 10% for economically weaker sections.

The order could change the face of the reservation regime in the country — unless reviewed by the Supreme Court — by removing the upper ceiling laid down by the Indra Sawhney judgment. Thursday’s is a landmark ruling since no caste reservation policy exceeding 50% has passed muster till now with the high courts or the SC. These include the Gujjar quota in Rajasthan, which has been attempted multiple times, and Jat reservation in Haryana.

In a crucial observation, the court ruled, “The 50% ceiling of reservation can be crossed when there exist extraordinary circumstances… We hold that the commission (Justice M B Gaikwad backward class commission) has shown the existence of such extraordinary circumstances.” The order comes as a boost to the BJP-Shiv Sena government as Maharashtra is scheduled for assembly polls later this year and the combine is sure to tout its success in comparison to Congress’s previous failures to push the quota. Marathas form a socially and politically influential community.

It is to be seen if in the interim, other states renew attempts for policies that breach the 50% ceiling. There are demands for reservation from caste groups across states, either by inclusion in the OBC list or by creation of a special group as done by Maharashtra. The impact of this ruling on the EWS quota, currently being heard in the SC, is also another factor that will bear watching.

After the Centre brought about a constitutional amendment in January to enable reservations on economic criteria (10% forward caste quota), it was expected that states would accommodate most of these quota demands from non-OBC, non-SC/ST communities under the new category.

However, the Maharashtra order may prove a paradigm-buster.

Importantly, the bench said, “The state possesses legislative competence to enact the Socially and Educationally Backward Class Act of 2018.”

It listed the “availability of quantifiable and contemporaneous data reflecting backwardness, inadequacy of representation and without affecting the efficiency in administration” as the conditions under which the 50% ceiling can be waived.

The court reasoned that lumping the sections such as Marathas in the 50% forward category will only mean that the more privileged castes continue to enjoy their ageold social and educational dominance.

Dismissing the petitions challenging the Maratha policy, the court ruled that the backward class commission report has conclusively established the social, economic and educational backwardness of the Maratha community and its inadequate representations in public jobs.