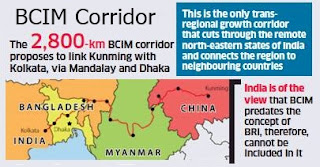 The long-proposed 2,800-km-long Bangladesh-China-India-Myanmar corridor, after being dropped by Beijing from its Belt & Road Initiative due to New Delhi's opposition, got a fresh lease of life at a recent meeting held by the four stakeholders in Kunming.

The participants agreed that comprehensive connectivity in roads, railways, waterways, aviation, energy and digital sectors will greatly enhance regional competitiveness, according to a joint statement by the four sides .The participants agreed at the meeting that it was necessary to widen the partnership to build this corridor. The 2,800-km BCIM corridor proposes to link Kunming with Kolkata, via Mandalay and Dhaka.

This is the only trans-regional growth corridor that cuts through the remote north-eastern states of India and connects the region to neighbouring countries. Chinese President Xi Jinping, during his meeting with Prime Minister Narendra Modi in Bishkek on the sidelines of the SCO Summit on June 13, had referred to the BCIM corridor as a development partnership mechanism.

BCIM has been previously mentioned as part of the BRI when it was launched in 2013, but it did not figure in the list of 35 corridors mentioned during the 2nd Belt and Road Forum held in Beijing in April this year.

India, which is not a party to the BRI, is of the view that BCIM predates the concept of BRI and, therefore, cannot be included in BRI.