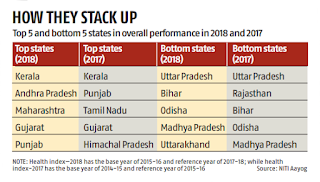 Kerala remains at the top of the heap among larger states in terms of various health parameters, followed by Andhra Pradesh and Maharashtra. Uttar Pradesh, Odisha and Bihar are the worst performers, according to Niti Aayog’s latest health index. Haryana, Rajasthan and Jharkhand top the charts based on incremental performance.

The health index—which took into account 23 health indicators during 2015-16 (base year) to 2017-18 (reference year)—depicts huge disparities across states and UTs.

The report, prepared by Niti Aayog in collaboration with the health ministry and with technical assistance from World Bank, has three categories—larger states, smaller states and Union territories —to ensure comparison among similar entities.

Among the smaller states, Mizoram ranked first in overall performance, while Tripura and Manipur were the top two states in terms of incremental performance.

Among the eight empowered action group states, only three—Rajasthan, Jharkhand and Chhattisgarh showed an improvement in their overall performance during the period taken into consideration.

The decline in the overall health index score of five empowered action group states (states that lag behind in demographic indicators and have high infant mortality rates)—Bihar, UP, Uttarakhand, Madhya Pradesh and Odisha—is attributed to the deterioration of performances in several indicators. 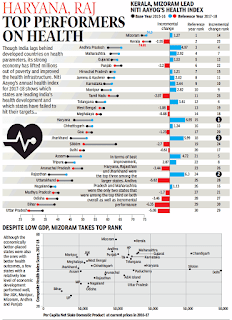