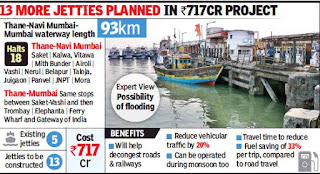 The ambitious Rs.717 crore waterway project connecting Thane-Navi Mumbai-Mumbai has got traction after the Union shipping ministry approved the plan and directed Thane Municipal Corporation to prepare a detailed project report for the 93-km project.

Mnister of state for shipping Mansukh Madviya was briefed on the project by civic chief Sanjeev Jaiswal in New Delhi. “The minister showed interest in the project linking Thane with Mumbai and Navi Mumbai, which will provide an alternative route to reach these cities other than saturated road and railways,” said Shiv Sena MP from Kalyan, Dr Shrikant Shinde, who was at the meeting.

The route will have 18 halts at jetties. The halts for Thane-Navi Mumbai will be at Saket, Kalwa, Vitawa, Mith Bunder, Airoli, Vashi, Nerul, Belapur, Taloja, Juigaon, Panvel, JNPT, Mora. The Thane-Mumbai route will be the same between Saket and Vashi, and further be diverted via Trombay, Elephanta, Ferry Wharf and culminate at Gateway of India.

The project will see floating jetties to ensure minimal damage to the creek front, but wherever possible, permanent jetties will be constructed, said a Thane civic official. “There are five jetties along the routes, where we are looking at capacity augmentation,” said an official associated with the project.

Initially, it will be operated only for passenger services. Experts said they are looking at introducing high capacity vessels that can ferry 250 passengers but it could be reworked after a traffic density study.

The Centre could share the project cost, said Sena MP from Thane Rajan Vichare, who was also at the meeting.

Environmental activists expressed concern over the destruction of ecology around the water bodies and said it could cause flooding.