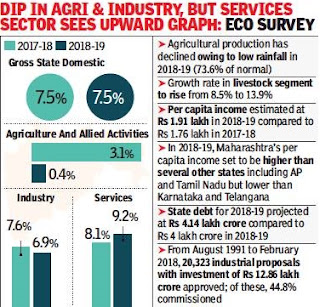 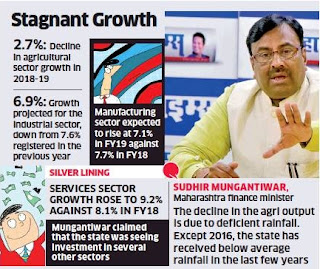 Maharashtra’s economy is expected to grow by 7.5% during 2018-19, same as the previous year, according to the Maharashtra Economic Survey report. The report shows that agriculture, industry and manufacturing services took a hit.

The biggest decline was in the agricultural sector with a decline of 2.7% expected over last year. The sector is expected to grow at just 0.4% against 3.1% in 2017-18. The industrial sector that grew by 7.6% last year is expected to fall to 6.9%. The only silver lining has been the services sector that showed a growth of 9.2% against 8.1% earlier.

The manufacturing sector is also expected to rise at just 7.1% compared with 7.7% last fiscal. Utility services are also projected to take a major hit with an expected grow of 4.3% against 6.5% last fiscal.

Manufacturing is estimated to rise at 7.15% in 2018-19 against 7.7 % in the previous fiscal, the survey said. The infrastructure/construction sector is expected to grow by 9.9% against 7.9% last year.

Maharashtra finance minister Sudhir Mungantiwar blamed the low growth of the agriculture sector on the prevailing drought. “The decline in the agri output is due to deficient rainfall. Except 2016, the state has received below average rainfall in the last few years,” said Mungantiwar. The finance minister claimed that the state was seeing investment in several other sectors and in the coming months they would see a rise. “Compared to 2017-18, we are expecting to see a rise in trade, hospitality, communication, financial and professional services, public administration, defence and other sectors,” Mungantiwar said.

His admission that growth ‘cannot be seen only through investment in select sectors’ is being seen by many as an admission that agriculture, industries and manufacturing sectors may see further fall in growth.

The dismal figures for the state’s economy comes at a time when the state government has been aiming to become a $1 trillion economy by 2025 and is aiming for double-digit growth. However, the double-digit growth was reached only in 2016-17 when the state had reached a 10% growth. The decline in growth in the farm sector would worry the government that is expected to go for polls in another three months as an estimated 52% of the state’s population get their livelihood from agriculture.