Modi & Putin stress on transfer of tech, manufacturing to India 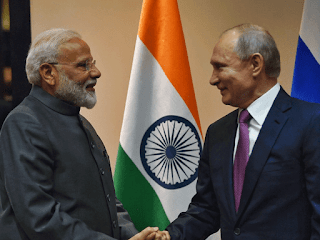 Prime Minister Narendra Modi and Russian President Vladimir Putin underscored the significance of taking bilateral ties to the next level, from the buyer-seller framework to one that ensured transfer of technology and manufacturing to India, in a meeting on the sidelines of the SCO summit. Modi thanked Putin for his support for the AK-203 Kalashnikov rifles manufacturing unit in Amethi, a joint venture set up in record time.

Briefing the media after the meeting, foreign secretary Vijay Gokhale said it was a “brief but very very rich”. Gokhale said the two leaders called for cooperation in the oil sector and use of skilled manpower for development of Far East region. The Russian President reiterated the invite to Modi formally to be the main guest at the Eastern Economic Forum in Vladivostok (Russia) in early September, and the PM warmly accepted the invitation, Gokhale said.

Russia’s deputy PM Yury Trutnev will be in India next week to prepare the groundwork for Modi’s visit. Gokhale said there will be a Russia, India and China summit meeting on the sidelines of the G-20 Summit in Osaka, Japan later this month. Putin said Russia awarded its highest state honour, ‘Order of St Andrew the Apostle’, to him for his initiatives to develop the bilateral relationship.