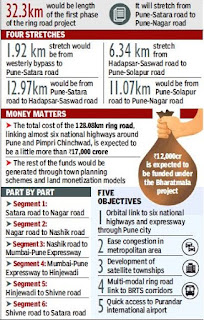 Chief minister Devendra Fadnavis said he would ensure that there was no delay in the disbursement of the central government funds to be allocated for the first phase of the ring road project, stretching 32.3 km and connecting Satara highway to Ahmednagar highway.

Fadnavis said the Centre would approve the funds before the assembly elections. The chief minister said the state would make all efforts to speed up the project and ensure that the funds were sanctioned without any delay to fast-track the work of the vital corridor. “We will get it approved from the central government,” read the text message of the chief minister.

The Centre had earlier said the project’s tender would be floated after 80% of the required land was in the PMRDA’s possession.

PMRDA officials stated that they were in a dire strait because they would need money to acquire another 56% land for the first phase of the ring road project, as mandated by the Centre for floating the tender. An official said the PMRDA’s funds were used for various other infrastructure projects lined up and needed the Centre’s funds for taking forward the project.

The Union government had last year announced allocation of funds for the ring road under its Bharatmala Pariyojana project, an umbrella programme for the highways sector. It focuses on optimizing the efficiency of freight and passenger movement across the country by bridging critical infrastructure gaps through effective interventions.

As a part of the project, the Centre had kept the ring roads of Pune and Bengaluru on the priority list. The ring road is likely to ensure better connectivity to highways and reduce the ordeal of travelling through congested interiors of Pune and Pimpri Chinchwad.