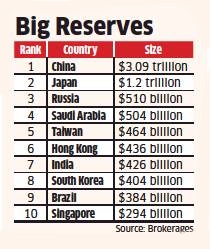 Foreign exchange reserves are held by the RBI as a tool to maintain stability of the currency and control inflation. This is done through periodic buying and selling of foreign currency assets in the spot and forward currency markets.

The reserves are primarily held in dollars, but other foreign currencies such as the yen, pound and euro also constitute these assets. India’s forex kitty is the sixth-largest in the world behind China, Japan, Russia, Saudi Arabia, Taiwan and Hong Kong. Apart from foreign currency assets, the reserves also comprise gold, special drawing rights and reserve position in the IMF.

Experts said that with the end of political uncertainty in the country after the general elections, India has become a favourable market for foreign investments, leading the RBI to purchase dollar assets in the forward premium market. This may likely cause the reserves to swell further in the coming weeks.

The forex kitty had touched the previous high of $426 billion in the week to April 13, 2018, but owing to a slew of factors such as emerging markets’ currency crisis in August post the crash of Turkey’s lira, rising crude oil prices and the US-China trade war, the central bank had to cut down its reserves to keep the rupee from depreciating against the dollar.