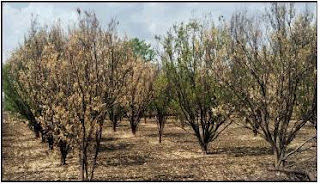 Changing weather conditions in Vidarbha over the past few years have spelt doom for orange cultivation in the region. In the near seven decade history of orange plantations here, this is the first time that an alarming 60% of orange orchards have gone completely dry and, for all purposes, died this year.

Warud tehsil of Amravati district has seen the maximum loss followed by Katol and Narkhed tehsils of Nagpur district. For the first time, big and rich farmers are talking about selling their lands and switching to other occupations.

Scanty and erratic rains in last two years coupled with prolonged high temperatures throughout May and delayed pre-monsoon showers this year are responsible for this plight of orange farmers. The loss caused to the ambia bahar crop alone, which fruits in September, is being pegged at about Rs.1,620 crore. Mrig bahar, the other crop, fruits from November to April. However, the loss due to orchards dying completely cannot be monetarily pegged.

Shridhar Thakre, one of the Maha Orange directors and a big farmer, said that he had stopped going to the orchards as he could not bear see the condition of the trees. He owns a 20-acre land with 3,500 orange trees in Talegaon village (Ashti) in Wardha district with irrigation facilities. But there is no water in the wells. The water table has gone below 1,000ft. “It is the first time that the temperatures hovered between 44 degrees celsius to 47.5 degrees in May. This year, there has been no pre-monsoon showers either. Neither the agriculture nor the revenue department visited the orchards even once,” said Thakre.

Rajendra Thakre from Benoda Shahid village in Warud tehsil says he has incurred a Rs.1.5 crore loss. “I have never seen such a situation in 30 years of agriculture. I have no option but to sell the land,” he said. All four of Thakre’s wells have gone dry. He tried bringing water from Paknala dam about 11 km from the orchard by spending Rs.18 lakh but the water in the dam too dried out.

Ramhesh Jichkar, who heads the Vidarbha Agriculture and Allied Producers Association and has oranges in 30 acres in Nagziri in Warud tehsil, says that 30% of his orchard have been affected. An orange tree needs about 240 litres per day. Taj Khan, who has orchards in 200 acres and is a trader as well in Shahpur village, says that he deepened a water reservoir using his money “but no rain means storage has been less”. “I have a farm pond too but when there is no rain there is no water to store,” he said.