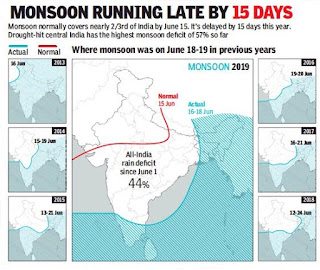 Stalled by cyclone Vayu after a much-delayed onset, this year’s monsoon has so far been the slowest progressing in at least 12 years, records show. It has currently reached just about 10-15% of the country, whereas two-thirds of India is normally covered by monsoon by this time.

The snail-paced progress has resulted in a countrywide rainfall deficit of 44% for the season (from June 1). Monsoon now covers Kerala, parts of south Karnataka, 66% of T N and most of the northeast. It is set to advance, but IMD officials said the system might take a week to gain

We expect the monsoon to reach the Konkan coast in two-three days and cover most of Maharashtra by June 25. Nearly all of central India is likely to come under the monsoon system by June-end, which means it is behind schedule by nearly 15 days,” said D Sivananda Pai, lead monsoon forecaster of IMD.

Monsoon’s progress has assumed added urgency this year because of acute water shortages in Maharashtra, Tamil Nadu and some other parts of central and south India. Water levels in major reservoirs in both the regions are critically low at around 10% of capacity.

A newspaper accessed IMD’s maps of monsoon’s advance since 2007 and found this year’s monsoon had made the least progress (by June 18-19) in all these years. The fastest ever was in 2013, the year of the Kedarnath deluge, when monsoon had covered the entire country by June 16, a month ahead of the normal date.

Central India is the hardest hit by monsoon’s delay. The region has a rain deficit of over 57% in June, which is adding to the drought caused by deficit rainfall in the preceding months. The monsoon shortfall in south India so far is 38% while it is 43% in the northeast and 27% in northwest India.

“Monsoon arrived over Kerala a week later than the normal date. Thereafter, formation of the northward-moving cyclone Vayu in Arabian Sea drew away moisture from the system. While Vayu is bringing much-needed rain in Gujarat and the west coast, it stalled monsoon’s progress,” Pai said.

Monsoon normally enters north India — beginning with parts of east Uttar Pradesh — around min-June. The normal date of monsoon’s arrival in Delhi is June 29. This year, however, the system is likely to enter the region only around the first week of July. One of the conditions that speeds up the movement of the monsoon is formation of low pressure systems over the Bay of Bengal, which then moves into the mainland, bringing rain. Currently, there is no low pressure system in sight.“We are getting some circulation over Bay of Bengal, which should help monsoon, by there’s no indication of a low pressure system forming as yet. If one forms say sometime next week, monsoon’s progress could be much faster. Its movement into north India would also depend on a western disturbance coming in at the right time,” Pai said.

An IMD update said monsoon could advance into Karnataka, some parts of south Konkan & Goa, Andhra Pradesh, remaining parts of Tamil Nadu and northeast India, sub-Himalayan West Bengal & Sikkim and some parts of Odisha in the next three to four days. IMD’s forecast of a normal monsoon this year had taken into account less than normal rains in June due to presence of an El Nino. 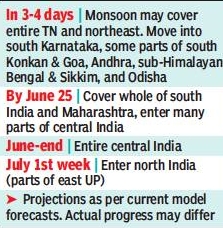