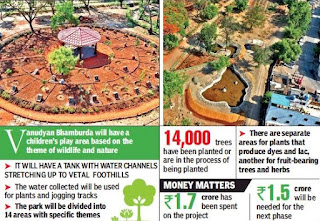 A new biodiversity park has come up at the base of Vetal hills in Bhamburda with open-air amphitheatres, interpretation centre as well as themed plants and herbs.

The park will be opened for public on June 3.

Construction work is in the final stages at the park named Vanudyan Bhamburda, which will have jogging tracks and lawns. There will be a children’s play area with wildlife and nature as its theme. Adjacent to it will be an amphitheatre. A traditional tank- with water channels stretching up to the foothills - has also been commissioned at the park.

Shivajinagar MLA, Vijay Kale, who had pushed for the project, said that the 14-acre park will lead to a significant improvement in the lives of the people living in nearby Janwadi settlement.

“Earlier, water from Vetal hills would flow right down to Janwadi slums, especially during the monsoon, and flood the area. Because of this haud (a traditional water tank), and landscaped water channels, the flow will be stopped. The water collected will also be used for plants and maintain the jogging tracks,” Kale told reporters.

A total of 14,000 trees have been planted or are in the process of being planted. The park has been divided into 14 themed areas.

“There are separate areas for plants that produce dyes and lac, another for fruit bearing trees and herbs. A part of it is dedicated to traditional Maharashtrian sweet dinka, which is derived from a number of fruits,” Kale added.

Around Rs.1.70 crore has already been spent on the project, according to forest department officials, and around Rs.1.5 crore is needed for the next phase of the project, which includes an audio-visual theatre and a nursery.

“The warehouses for MAPCO, a state government concern, were housed here. However, after they closed this facility, the land was encroached upon and garbage was dumped on it. The state government transferred the land to the forest department. We came up with a plan to build a biodiversity park last year, and thankfully, within a year we managed to construct most of the facility,” said a forest department official.