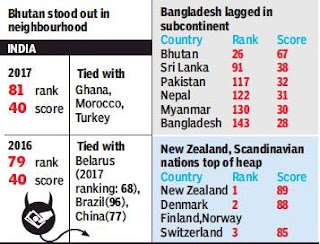 India has been ranked 81st in Transparency International’s Global Corruption Perception Index 2017. While it maintained its score at 40 on a 100-point scale, where anything below 30 is considered seriously corrupt, its ranking changed from 79th last year partly because Vanuatu, one of the countries added this year, was rated higher and partly because others improved.

A Transparency International release also characterised India as “among the worst offenders” in Asia Pacific region on grounds of journalists, activists, opposition leaders and even personnel of law enforcement or watchdog agencies being threatened or even murdered. In this, it was clubbed with the Phillipines and Maldives. “These countries score high for corruption and have fewer press freedoms and higher numbers of journalist deaths,” the report said.