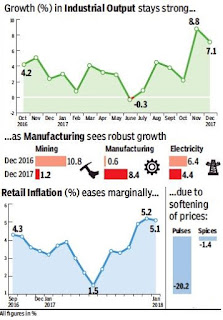 Retail inflation cooled in January on the back of slowing food prices, while industrial output growth in December was better than expected, due to robust manufacturing and capital goods sectors.

Inflation, as measured by the CPI, rose an annual 5.1% in January, slower than previous month’s 5.2%. Consumer food prices also cooled and increased 4.7%, lower than its 5% increase in December. Housing prices remained firm, and surged over 8% during the month.

Cooling food prices will have a calming effect on retail inflation.

Separate data released by the CSO showed industrial output growth rose just over 7% in December, slower than previous month’s upwardly revised of 8.4% but still higher than market expectations. The manufacturing sector rose an annual 8.4% in December, compared to 0.6% in same month last year.

Several data sets in the past few months have pointed to a revival in the manufacturing sector as it shrugs off the impact of demonetisation and rollout issues linked to the GST. Economist said the robust trend in factory output augured well for overall growth.