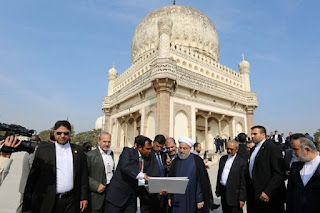 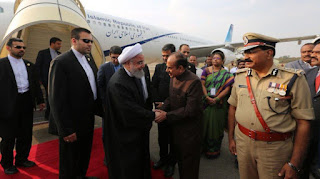 The visiting Iranian President Hassan Rouhani has applauded India’s religious diversity and called for unity between the Shia and Sunni communities in a statement that is being seen as important for the Islamic world in the backdrop of lukewarm ties between Iran and Saudi Arabia often ascribed to sectarian differences.

“India is a living museum of different ethnicities and religions peacefully co-existing. This process is going on for centuries. Shia, Sunnis, Sufis, Hindus, Sikhs and others are living together. They together built their country and built their civilisation,” Rouhani said in Hyderabad in a speech delivered in Persian. Addressing Muslim leaders and scholars belonging to different Islamic schools of thought, Rouhani called for unity among the Shias and Sunnis while blaming the West for sowing the seeds of discord among various sects of Muslims.

That the Iranian president chose India to call for unity among the Shia and Sunni communities is significant given India’s growing multi-faceted partnership with both Iran and Saudi Arabia, experts said. India has been able to maintain a balanced foreign policy outreach to engage with both the countries at the same time, they said. Pointing out that there can be no military solution to conflicts, Rouhani said that Iran seeks brotherly relations with all Muslims nations and the countries of the region including India. Rouhani on Friday visited the historic Makkah Masjid in Hyderabad and offered prayers for Shia-Sunni unity and peace across the Muslim world. The visit to the Sunni mosque is significant as it is aimed at conveying the message of Shia-Sunni unity.