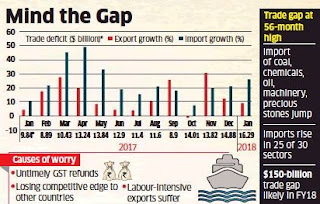 India’s trade deficit touched a 56-month high in January, driven by a sharp rise in imports of petroleum, chemicals, silver, pearls and machine tools, even as exports expanded for the third consecutive month.

In the April-January period, trade balance was $103.7 billion.

On exports side, outward shipments increased in 20 out of 30 sectors, but declined in traditional sectors like yarn and ready made garments whose competitive edge could have been blunted by an appreciating rupee.

A slowdown in exports from labour-intensive sectors like garments, carpets, handicrafts and man-made textiles was primarily due to liquidity crunch as tax refunds have been getting blocked since the introduction of goods and services tax, FIEO said in a statement.

Exporters urged the government to look into the refund issue “seriously” by undertaking a drive so as to clear all cases by March 31, 2018.