Half of Himalayan springs are dry or seasonal now 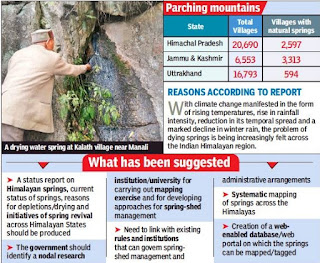 Half of the perennial springs in Himalayan region have already dried up or have become seasonal resulting into acute water shortage for drinking and other domestic purposes across hundreds of mountain villages. As per a rough estimate, there are five million springs across India, out of which nearly 3 million are in the Indian Himalayan region alone Recently released report of Niti Aayog working group on “Inventory and Revival of Springs in Himalayas for Water Security” states that there is increasing evidence that springs are drying up or their discharge is reducing throughout the Himalayan region.

Spring discharge is declining due to increased water demand, changing land use patterns, and ecological degradation. Many natural watering holes for wildlife are in the form of springs and seeps. Depletion has meant disturbances in the water security inside forests and national parks and their fringe areas as well.

With half of the perennial springs having dried up or have become seasonal, acute water shortage is being faced for drinking and other domestic purposes across hundreds of Himalayan village.

The report says that despite the key role that they play, springs have not received due attention.

What is even more important to note is the fact that while glaciers are easily considered to be the source of the mighty Himalayan rivers, most of them have their origin in the form of springs, the report points out.

The non-glacial rivers clearly show how hundreds of springs provide the flows in stream and river channels even during the dry season. Any significant depletion in such spring flows at river origins will surely impact the flow of rivers, it added.