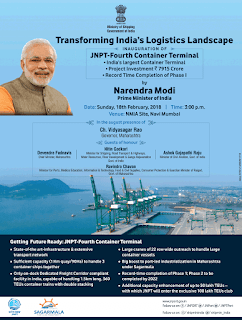 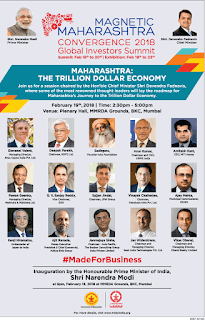 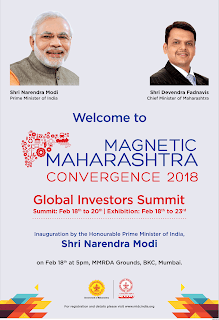 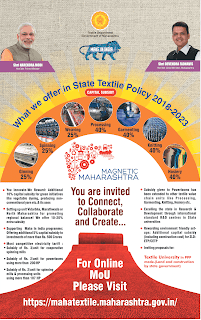 Prime Minister Narendra Modi yesterday congratulated the Maharashtra government for setting the ambitious target of making the state a trillion dollar economy by 2025, saying, “Nothing is impossible in the land of Chhatrapati Shivaji Maharaj.”

Modi was speaking at the inauguration of the first global investors’ summit organised by the state, Magnetic Maharashtra: Convergence 2018, at MMRDA grounds at BKC. Maharashtra’s economy is currently pegged at around $400 billion.

Taking a dig at the previous UPA government, the Prime Minister said, “A few years ago, India’s economy became $1 trillion economy but that advantage was wasted in scams and there was talk about Fragile Five.”

In 2013, Morgan Stanley had coined the term, Fragile Five, to describe the economies that were too dependent on foreign investment to achieve their growth target. Along with Turkey, Brazil, South Africa and Indonesia, India fell in that group.

“The opportunity of India entering the $1 trillion club was wasted but after this government came, we changed the atmosphere and now people are talking about India becoming a $5 trillion economy. This change was brought about by policy interventions, timely decisions, reforms and increase in ease of doing business,” Modi said.

He pointed out that his government scrapped 1,400 redundant laws and while drafting new legislations, care was taken to ensure they are not unnecessary complicated.

“Summits like Magnetic Maharashtra are example of co-operative and competitive federalism and now all major states are organising such summits, including North East state like Assam,” he said, adding that this was a trend Gujarat started and all states followed it up.

Showering praise on the state leadership, the Prime Minister said, “Due to business-friendly policies of the state government, Maharashtra was able to attract 51% of the FDIs that came into the country during financial year 2016-17.”

He also congratulated the state government for undertaking ambitious projects like the 700-km Samruddhi corridor (Mumbai-Nagpur Expressway), which has the potential to create 2.5 million jobs.

Speaking earlier, Chief Minister Devendra Fadnavis announced that, Maharashtra aspires to be $1 trillion economy and it will be the first Indian state to achieve this mark.

“Maharashtra is growing at 9.3% and at this rate, we can achieve the target of becoming a 1 trillion dollar economy by 2030. But we are advancing the target by five years and to achieve it, services need to grow at 15% per annum and industry at 12% per annum. We have drawn our policies in such a manner that they will help us achieve this target,” Fadnavis said.

The state has set the target of signing MoUs worth Rs.10 lakh crore at the investment summit. “During Make in India two years ago, we signed MoUs worth Rs.8 lakh crore. Maharashtra’s conversion rate of MoUs in actual investment is 61%,” said Fadnavis.

Maharashtra’s economy must grow at the rate of 15.4% annually to become a $1 trillion economy (Rs 65 lakh crore at current exchange rate) by 2025, compared to its current growth rate of 9.4%, chief minister Devendra Fadnavis said.

He also said that he is working to transform the state’s economy into mainly a services driven one from the current mix of manufacturing-cum-services driven. And for this, Fadnavis wants to focus more on a digital-enterprise driven administration-cum-services and also impart skills to about 50 lakh youth in the next eight years to be employed in the services sector. If the state’s economy continues to grow at the current annual rate, it would only be in 2029 that the $1 trillion target would be achieved, the CM said. Fadnavis was speaking at the Magnetic Maharashtra global investor summit in the city. Currently, the state’s economy is nearly $400 billion (Rs.26 lakh crore).

To achieve the targeted double-digit growth rate, the services sector has to take the lead with an estimated growth rate of 15.5% annually while the manufacturing sector should grow at 12.3% and the agriculture sector at 5.5% rate, he said. Fadnavis also said that by 2025, the share of services in the state’s economy should be about 67% from 59% now, industry’s should dip to 27% from 30% while the agricultural sector’s share should nearly halve to 6% from 11% at present. He said that the agriculture and industry sectors at present are showing positive growth, but some more acceleration is required in the services sector.

Fadnavis said that though agriculture’s share in the state GDP is only 11%, it employs nearly half of the workforce and there was hardly any more scope for it to absorb more people productively.