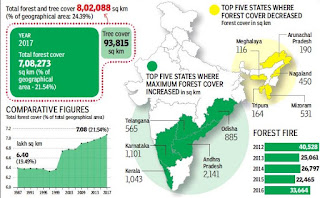 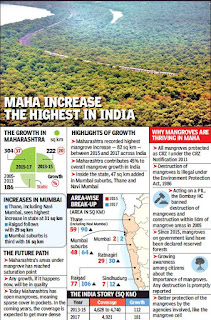 India’s forest cover increased by 6,778 sq km over the last two years with Andhra Pradesh, Karnataka, Kerala, Odisha and Telangana increasing their green footprint during the period though there is a worrying decline in six northeastern states, including a shrinkage of 630 sq km in the eastern Himalayas.

While overall green cover, including tree patches outside recorded forest areas, reported an incremental 1% increase (8,021 sq km) over the last assessment year in 2015, the quality of forests remain a hotly debated subject even as satellite monitoring has increased availability of data.

The increase, based on satellite data and subsequent ‘ground truthing’, has put the total forest cover at 7,08,273 sq km which is 21.54% of the country’s geographical area.

Releasing the India State of Forest Report 2017, the environment ministry looked at the overall green cover (total forest and tree cover) of 8,02,088 sq km and pitched it as a success of multiple afforestation programmes.

Though this figure puts green cover at 24.39% of India’s geographical area, this does not reflect a complete picture as it includes tree cover of 93,815 sq km, primarily computed by notional numbers. In the past, studies have argued that the problem of depletion and over-exploitation of forests has taken a toll of India’s forests and their sustainability and the problem of simplifying a maze of rules and tune conservation with the needs of local communities remains a challenge Taking into account the density (canopy covering branches and foliage formed by the crowns of trees), forest cover is divided into ‘very dense’, ‘moderately dense’ and ‘open’ forest. The ‘very dense’ forest cover has increased over the last assessment of 2015, but the ‘moderately dense’ category reported a decline — a sign which environmentalists consider quite worrying.