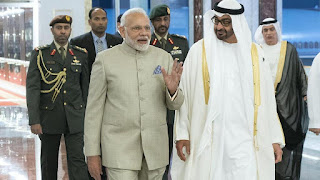 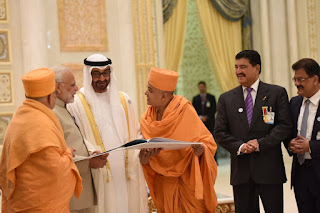 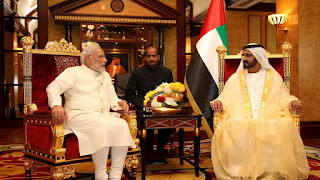 In an oblique reference to Pakistan, India and UAE deplored efforts by countries to give religious and sectarian colour to the political issues.

In a joint statement, Prime Minister Narendra Modi and Abu Dhabi crown prince Sheikh Mohammed Bin Zayed Al Nahyan said it’s the responsibility of all states to control the so-called ‘non-state actors’ operating from their territory. Such nations should cut all support to terrorist groups, the statement said.

The two countries agreed that extremism and terrorism cannot be defeated by force only, and acknowledged the need for a holistic approach, which includes disrupting the use of web and social media for promoting extremist and violent ideologies.

Earlier in the day, PM Modi said India-UAE ties go beyond trade and both the countries will work together to fulfil the dreams of the Indian diaspora in the Gulf country.

“I assure you that we will work together to bring to reality the dreams you see, here and in India,” Modi said at the foundation stone-laying ceremony of Abu Dhabi’s first Hindu temple. He was addressing hundreds of Indians working in the UAE who had gathered at the iconic Dubai Opera House to listen to him. “Our relations with the UAE are not just that of a buyer and a seller. It has become much more,” Modi said in his speech delivered in Hindi.

He thanked the government of the UAE — home to a nearly 3.3-million strong Indian diaspora — for providing them “a home away from home”.

Modi also witnessed through videoconferencing the foundation stonelaying ceremony of the Bochasanwasi Shri Akshar Purushottam Swaminarayan Sanstha temple on the Abu Dhabi-Dubai highway. The groundbreaking ceremony of the first Hindu temple in Abu Dhabi was livestreamed to the Dubai Opera House.

Inviting UAE businessmen to invest in India, Modi said India’s leap in the World Bank’s ease of doing business rankings from 142 to 100 was “unprecedented, but we are not satisfied”. “We want to do better. We will do whatever it takes to make it possible,” Modi said.

In his keynote address at the World Government Summit in Dubai, Modi rued the fact that even after all the development, poverty and malnutrition have still not been eliminated. “On the other side, we are investing large portions of money, time and resources in missiles and bombs. We must use technology as a means to development, not destruction,” he told the gathering, amid applause.

He also expressed concern over attempts by some to radicalise the cyber space with the use of technology, in an apparent reference to its use by jihadists to recruit cadres.

Noting that 9.5% of the world’s population lives below the poverty line despite the tremendous population growth, he said: “Today there are great challenges — poverty, unemployment, education, housing and human catastrophes.”

India is the ‘guest country’ at the sixth edition of the World Government Summit in Dubai being attended by more than 4,000 participants from 140 countries.

“It is a matter of pride for not only me but also the 125 crore people of India that I have been called as the chief guest at the World Government Summit,” Modi said. He hailed the use of technology by the Dubai government, saying a desert has been transformed.

“It’s a miracle,” he said, describing Dubai as an example for the world. “In terms of technology, a desert has been transformed...” “Technology has empowered common man via minimum government, maximum governance. In e-governance, E stands for effective, efficient, easy, empower, and equity,” he said.

Modi shared his insights as well as developmental strategies. The PM said that everyone must follow the six ‘R’s — reduce, reuse, recycle, recover, redesign and remanufacture since this will lead to ‘Anand’.

He also listed various digital and technological advancements under his government in India such as biometric registration of people and farmers being able to sell through portals online. “India Mars Orbiter costs less per kilometre than a taxi ride — ₹7 per kilometre compared with ₹10 per kilometre.”