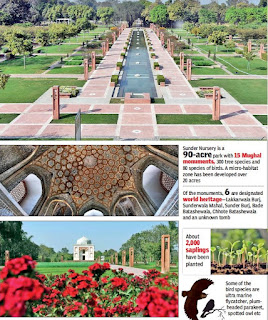 At 90 acres, Sunder Nursery is comparable in size to the famed Lodhi Garden. But it doesn’t receive many visitors as it’s just a place to buy plants. This week, this is set to change as a renovated Sunder Nursery opens to the public as a heritage park.

For over a century, this place has been a nursery, and 20 acres are still an active nursery maintained by CPWD. The rest of the area would now be a treat for nature lovers and heritage enthusiasts. The nursery was renovated by Aga Khan Trust for Culture, and following an agreement signed last December, AKTC would maintain the park for 10 years. For that, requisite infrastructure would be built such as a garden house to showcase flora, a cafe, toilets etc.

So far, the park is open only on weekdays up to 5pm. This would be stretched and even weekends would be open days. Security and other maintenance infrastructure would be put in place by October. Entry would be ticketed.

Sunder Nursery rivals the Rashtrapati Bhavan for the huge variety of flora and fauna. Earlier, the area only housed Mughal garden tombs. At the beginning of the 20th century, the British converted the area into a nursery for the new capital city. In 2007, following an MoU between CPWD, ASI, the municipal corporation and AKTC, conservation and landscaping works started. AKTC has built similar parks in Kabul, Cairo, Chantilly (France) and Edmonton (Canada).

Designed by landscape architect Late M Shaheer, Sunder Nursery has a 550m ornamental central vista that starts from the entrance zone of Humayun’s Tomb. An official said the landscape master plan derived inspiration from the “traditional Indian concept of congruency between nature, garden and utility coupled with environmental conservation”.

The gardens along the central vista, inspired by Mughal traditions, have lotus-shaped marble fountains. Water flows through geometric flowerbeds and raised sandstone pathways. A lake on the northern edge of the central vista will have walkways, seats and pavilions along the edges. An amphitheatre has also been built for cultural events. The lake would collect rainwater and also serve as a reservoir for emergency use.

Officials said the nursery has over 300 tree species, some not found elsewhere in Delhi. Over 80 bird species have also been recorded. As an added attraction for children, an educational resource on Delhi’s ecology has also been set up for the 5,00,000 schoolchildren who visit the adjoining Humayun’s Tomb annually. This 20-acre micro-habitat zone showcases plants of the Ridge, and the riverine, marshy landscapes that were once found in Delhi.

The heritage aspect is striking too. There are 15 Mughal monuments within the nursery, some under ASI and some unprotected. These have been conserved by AKTC over the years. In 2016, Unesco extended the world heritage designation to 12 monuments.