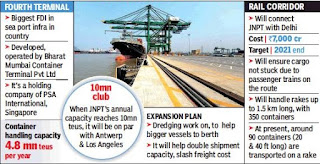 The country’s biggest container cargo terminal, Jawaharlal Nehru Port Trust, will be on par with European ports by 2022 when it is expected to handle 10 million teus (a measurement of 20- foot equivalent container units) annually. Before that, its capacity is set to go up by 50%, from the present 4.8 million teus per year, with the launch of the first phase of its fourth container terminal.

The handling of 10 million teus annually will put it on par with big ports—Antwerp in Belgium, Hamburg of Germany and Los Angeles of the US.

The one-km long first phase of the fourth container terminal will be officially e-launched by PM Narendra Modi on Sunday. The first phase will increase JNPT’s capacity by 2.4 million teus per year, and the second phase—another one km extension by 2022—will give similar benefit. As a result, the fourth terminal alone will handle as much load as the other three do now.