A strong focus on national security, an ambitious expansion of income support to all farmers, pension for small and marginal farmers and traders, Rs.10 lakh accident insurance for traders under GST and a promise of lower taxes, and Rs.100 lakh crore investment in infrastructure are highlights of the BJP manifesto released.

The ideological contrast to the Congress manifesto was sought to be established through formulations calling for revocation of Article 35A and a reiteration of BJP’s long-standing demand for scrapping Article 370 along with a promise to give a free hand to security forces to respond to terrorism. As in 2014, BJP called for all efforts within the constitutional framework to facilitate a Ram mandir in Ayodhya.

The party also expressed its solidarity with those opposing implementation of the Supreme Court order allowing the entry of women of menstrual age in Kerala’s Sabarimala shrine, while promising to secure constitutional protection on issues related to faith and belief. The manifesto is marked by an unabashed invocation of “cultural heritage”, with the party emphasising that it sees cultural values as “essential ingredients of our future”, rather than “hurdles to progress”.

The promised expansion to bring all farmers, big and small, under the Rs.6,000 a year income support scheme will mean addition of over two crore beneficiaries, senior government sources said. This will take the number of potential beneficiaries to around 15 crore from the current 12.3 crore, though share croppers are not covered under the scheme.

The manifesto launch saw BJP leaders asserting that the party was headed for a win in May. 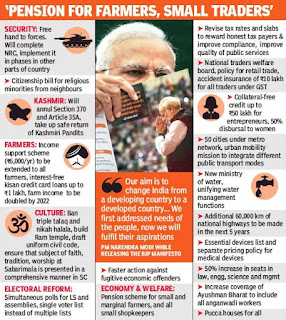 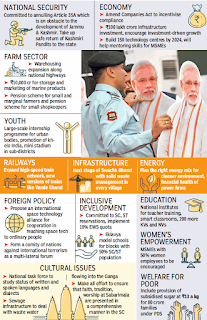