India gets radar sniffer in sky 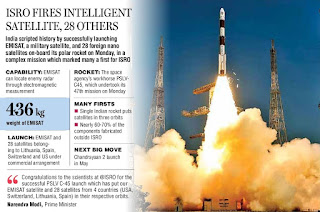 Five days after striking down a low earth satellite with an A-Sat missile, India launched a satellite that will protect its assets, including fighter jets and spacecraft, by detecting radars in enemy territory.

Electro-Magnetic Intelligence Satellite (Emisat) will intercept radar signals and detect the kind of radar and its location. A radar emits radio waves in specific frequencies that hit the targets and bounce back — telling the radar the nature of the target, its movement and distance.

Isro’s PSLV-C45 made unique manoeuvres to three different circular orbits to also inject 28 foreign satellites. The fourth stage of the new variant of PSLV, in one of its longest missions lasting three hours, will stay alive for the next six months providing a platform for three scientific instruments to collect data in micro gravity atmosphere.

Isro chairman K Sivan said that converting PS4 into an orbital platform would be most beneficial for students who can conduct experiments. Powered by solar energy, PS4 will orbit on a circular path at 485 km, with three instruments. It includes automatic identification system for maritime applications made by Isro, automatic packet repeating system to assist amateur radio operators made by Radio Amateur Satellite Corporation and an advanced retarding potential analyser for ionospheric studies made by students of Indian Institute of Space Science