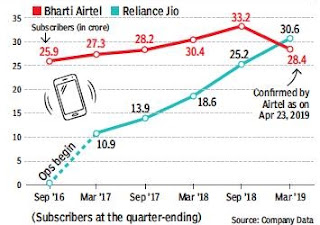 Nearly two and a half years after launching mobile phone services, Mukesh Ambani’s Reliance Jio has overtaken Bharti Airtel’s subscriber base to emerge as the second-largest telecom company in the country.

A telecom industry analyst said that the pace of growth of Jio’s subscriber additions may see the company overtake Vodafone-Idea in the coming quarters.

For Sunil Mittal’s Airtel, which dominated the Indian telecom space for almost two decades, the fall has been dramatic — it used to be the market leader till the middle of last year before being edged out by the new entity that formed after the merger of Vodafone India and Idea Cellular.

The meteoric growth in Jio’s business since it launched services in September 2016 has been fuelled by aggressive and dirt-cheap consumer tariff plans with the company launching operations with free voice call facility.

Jio has been adding subscribers at breakneck speed at a time when Airtel and Vodafone-Idea have been weeding out low-paying users. According to a report by JP Morgan, Jio added 2.7 crore new customers between January and March 2019, after logging in 12 crore new members through 2018.

Importantly, the company continues to lead the data space through its 4G-only business, and is actively scouting for more customers with cut-throat tariffs.

Jio’s aggressive entry into the telecom business — in Mukesh Ambani’s second avatar in the mobile space — had unshackled the financials of the industry completely. Airtel, which had initially accused Jio of engaging in “predatory pricing” to gain market share, has seen its domestic operations slip into losses, while Vodafone India and Idea were forced to strike synergies and lower operating costs.

Jio, however, continues to be profitable in its operations and also had the highest adjusted gross revenue in access services amongst all the telecom companies in the December quarter. While Jio’s AGR was Rs.9,482 crore, Vodafone-Idea was at Rs.7,224 crore and Airtel at Rs.6,440 crore, according to a report released by telecom regulator Trai.

Ambani had made it clear from the very beginning that his business would not be a pure-play mobile telecom company, but would aim at creating a digital eco-system that — among other areas — would focus on high speed internet, news and entertainment content, movies, music, chat, and financial transactions.

Jio has been the strongest in terms of bagging internet customers, especially as it also offers mobile handsets bundled with its services. In 2018, Jio captured 60% share of new 4G subscribers, and accounted for 65% of industry 4G customers as of end December 2018. Further, it carried 70% of 4G data traffic in 2018, and 61% of overall data traffic.