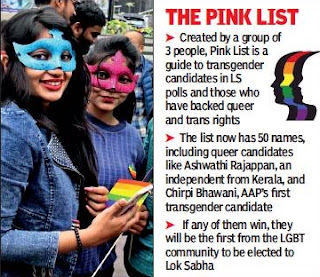 No matter who wins the 2019 Lok Sabha elections, the one who takes the hot seat in Delhi will have a number of promises to keep to the country’s LGBT voters, given the “commitment” that each political party has made towards the rights and beliefs of sexual and gender minorities in their manifestos.

While it’s common for other marginalised groups to find themselves deluged with campaign promises, this is a first for the queer community. And it comes close after the decriminalisation of Section 377 last year. But the fight for equal rights has just begun, feel members of the queer community. From basic rights at the workplace to marriage, adoption and housing rights, there are issues aplenty that LGBT Indians still face.

“Gay men and women want to grow old together in dignity and whoever comes to power needs to ensure this... marriage rights are especially important so that we can nominate our partner to inheritance and also care for them medically,” said Sridhar Rangayan, an activist-filmmaker.

Activists estimated that queer people make up about 6% of India’s population.

In their pitch to the community, BJP has said it is committed to bringing transgender individuals to the mainstream through socio-economic and policy initiatives. It also says it will ensure self-employment and skill development for transgender youth, but does not elaborate further.

Congress’s manifesto proposes a “diversity index” to measure sexual diversity across government bodies. The party has an entire section on LGBT matters and promises to immediately withdraw the Transgender Bill of 2018 that is pending in Parliament if it comes to power. It aims to instead introduce a Bill consistent with the SC judgment to protect LGBTQIA rights.

CPM has promised legalisatiuon of same-sex marriage and protection to same-sex couples. Its manifesto talks of reservation in education, expansion of UGC’s anti-ragging policy to address bullying or violence based on sexual orientation, and accessible bathrooms for trans, intersex and gender non-conforming individuals.

Surprisingly, parties like AAP and Trinamool, whose members have expressed solidarity with the queer community, have refrained from spelling out their stance in their political manifestos.