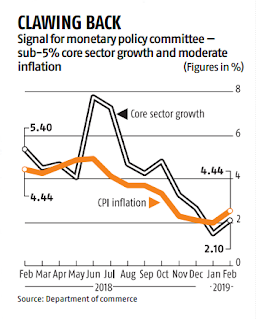 The growth of eight core sectors slowed down to 2.1% in February due to fall in output of crude oil and refinery products.

Production of crude oil and refinery products contracted by 6.1%, and 0.8%, respectively, in February.

However, coal and natural gas output grew by 7.3%, and 3.8%, respectively, in the month under review. Sluggish infrastructure sector growth will also have impact on the Index of Industrial Production as these segments account for about 41% of the total factory output.

According to commerce and industry ministry data, during April-February 2018-19, the eight sectors recorded a flat growth rate of 4.3% over the same period in the previous fiscal.