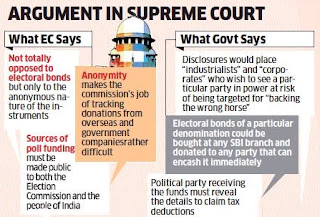 The Election Commission told the Supreme Court that it favours full “disclosure and transparency” on subscriptions to electoral bonds, while the government insisted on donor “anonymity” of the instruments to help eliminate unaccounted cash and fund polling expenses that are now among the world’s highest.

The poll panel, represented by senior advocate Rakesh Dwivedi, and standing counsel Amit Sharma, argued that it wasn’t totally opposed to electoral bonds, but only to the anonymous nature of the instruments. Dwivedi said that anonymity made the commission’s job of tracking donations from overseas and government companies – both legally barred at present – rather difficult.

Indian units of foreign companies are allowed to donate unlimited amounts to any political party of their choice under finance bill amendments made in 2017. “We are opposed to legalising anonymity. Anonymity must go. Sources of poll funding must be made public to both the Election Commission and the people of India,” Dwivedi said.

The poll panel and the government were placing their views before a three-judge bench led by Chief Justice Ranjan Gogoi. The court is hearing a plea by the Association for Democratic Reforms, which is seeking either a stay on electoral bonds or full disclosure as interim relief. The bench also includes Justices Deepak Gupta and Sanjiv Khanna. The panel said it had opposed the idea of anonymity from its very inception. The government, on its part, said donor anonymity was necessary to ensure that funds flow in to meet the country’s burgeoning poll expenses.

Attorney General KK Venugopal said poll funding was the bane of this country. He suggested that electoral bonds were a good way of mopping up surplus money to fund election expenses. “The scheme will eliminate black money,” Venugopal said.

Electoral bonds also ensured total anonymity for the donor, he said, adding that disclosures would place “industrialists” and “corporates” that wish to see a particular party in power at risk of being targeted for “backing the wrong horse.”

Venugopal said electoral bonds of a particular denomination could be bought at any SBI branch and donated to any party that can encash it immediately. No one knows the purchaser. Any information on these can only be revealed as part of any criminal investigation or under a court order, he said. The bench wanted to know how electoral bonds work. The government counsel is expected to provide more details on the subject when arguments resume Thursday. He claimed that the political party receiving the funds must reveal the details to claim tax deductions.

ADR, through activist lawyer Prashant Bhushan, is seeking a temporary ban on electoral bonds in the poll season or a court order on complete disclosures to ensure transparency in poll funding. He has alleged that both the Congress and the BJP have stalled efforts at clean funding of polls by opposing an order that brought the subject under the RTI. Bhushan also accused the BJP of bringing in changes to the FCRA with Opposition support to clear the path for circuitous foreign funding through Indian subsidiaries.