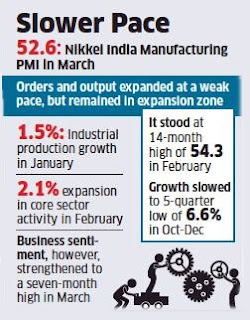 India’s manufacturing activity slowed to a six-month low in March as orders and output expanded at a weak pace, but it still remained in the expansion zone.

The moderation, along with weak core sector growth in February, strengthens the case for a rate cut when the central bank’s monetary policy committee meets later this week.

The Nikkei India Manufacturing Purchasing Managers’ Index fell to 52.6 from a 14-month high of 54.3 in February. A reading above 50 indicates expansion and below that mark, contraction.

India’s economic growth slowed to a five-quarter low of 6.6% in the October-December quarter, and is expected to have remained soft in the last fiscal quarter as well.

The PMI survey since January has shown a more optimistic outlook for manufacturing than suggested by government data.