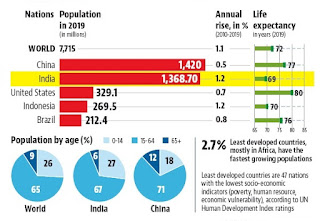 India’s population grew at 1.2% a year between 2010 and 2019, marginally higher than the global average of 1.1% a year in this period, but more than double China’s 0.5% a year, according to the United Nations Population Fund’s State of the World Population 2018 report.

The world’s population rose to 7.715 billion in 2019, up from 7.633 billion the year before, with the average life expectancy remaining 72 years.

Least developed countries recorded the highest population growth, with countries in Africa registering an average of 2.7% a year, said the report, which marks 50 years of the UNFPA being established to support countries to bring down fertility levels.

Much of the overall increase in global population till 2050 is projected to occur in high fertility countries, mostly in Africa, or in countries with large populations, such as India and Nigeria.

Around half India’s population in 24 states have achieved so-called replacement fertility rates of 2.1 children per women, which is the desired family size when the population stops growing, but the country’s large youth bulge will continue to fuel population growth even as the size of the ageing population increases.

The poorest 20% households have the largest unmet need for contraception and reproductive health services, with adolescents, disabled, unmarried young people, and the socially marginalised being the most deprived, said the report. The report also marks 25 years of International Conference on Population and Development in 1994, where 179 governments agreed on a rights based approach to sexual and reproductive health to address population growth. Maternal deaths have declined by at least 40% since 1994.

The challenge lies in the last mile delivery of services.