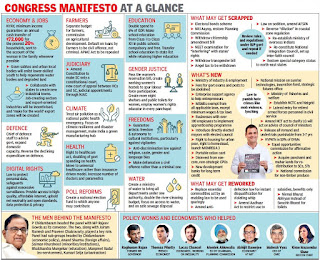 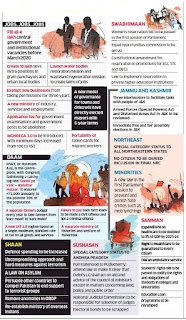 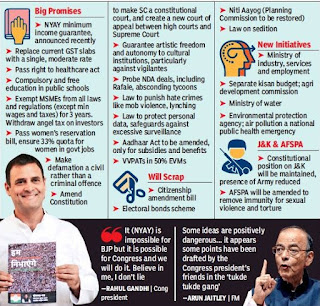 In its manifesto for this summer’s Lok Sabha elections, the Congress has promised freedom from debt to farmers, good governance, protection of existing jobs while creating new ones and effective implementation of anti-corruption laws. Here are 21 key promises the Congress says it will fulfill if elected to power

MINIMUM INCOME GUARANTEE: The Nyuntam Aay Yojana to be implemented to ensure ~72,000 per year is transferred to the country’s poorest 20% households.

REVAMPED GST: The Goods and Services Tax to be simplified “with a single moderate rate of tax, zero rating of exports, and exemption for essential goods and services”.

TRIBAL RIGHTS: The Forest Rights Act, 2006, to be implemented. “No forest dweller will be unjustly evicted,” the manifesto read.

PROTECTING INSTITUTIONS: Bodies such as RBI, ECI, CIC and CBI to be given authority and autonomy. A National Election Fund will replace NDA’s electoral bonds to ensure free and fair elections.

RIGHTS OF LGBTQIA+: Congress has promised to “immediately withdraw” the Transgender Bill, 2018 and instead draft a new bill in “consultation with the LGBTQIA+ community”.

ANTI-DISCRIMINATION: A law to be enacted to prohibit discrimination on the basis of language, caste, religion or gender in the supply of goods and services

EMPLOYMENT: About 3.4 million jobs to be provided in the public sector, of which 400,000 central government vacancies will be filled before March 2020.

DEFENCE FOCUS: Defence spending to be increased and modernisation programmes of the armed forces will be carried out in a transparent manner.

STEPS IN EDUCATION: School education from Class 1 to Class 12 in public schools to be made compulsory and free. “We will double the allocation for education to 6% of GDP by 2023-24.”

RIGHT TO HOMESTEAD: Right to Homestead Act to be enacted to provide a piece of land for every rural household that does not own a home or own land on which a house may be built.

URBAN GOVERNANCE: A new model of governance to be introduced for towns and cities through directly elected mayors and Right to Housing will be introduced.

PRESS: A law to be enacted to curb monopolies and cross-ownership in media. Cases of suspected monopolies will be referred to the Competition Commission of India

RESERVATION IN PROMOTION: An amendment to the Constitution to ensure reservation for SCs, STs and OBCs in promotion posts

FARM PUSH: Farmers will be put “on the path from ‘karz maafi’ (loan waiver), to ‘karz mukti’ (loan-free)”. A separate ‘Kisan Budget’ will be presented every year.

FIGHT AGAINST HATE: Police and district administrations to be held accountable for proven negligence in the case of riots, mob violence and hate crimes against vulnerable sections.

GENDER JUSTICE: Women’s reservation bill to ensure 33% seats for women in Lok Sabha and legislative assemblies, and a 33% quota for women in all central government jobs.

FREEDOM OF CITIZENS: A law on privacy to be enacted and the use of Aadhaar will be restricted to the original purposes of the Aadhaar Act.

ANTI-DEFECTION: An amendment to the Anti-Defection Law to ensure immediate disqualification of MPs and MLAs who disobey the party whip or withdraw allegiance

PLANNING COMMISSION: The Niti Aayog to be scrapped and Planning Commission will be reconstituted with re-defined responsibilities