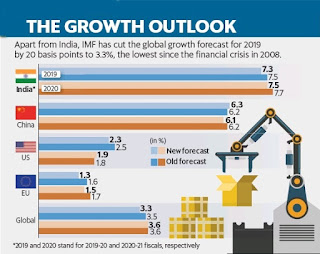 International Monetary Fund has pared India’s growth forecast for the just-concluded fiscal and the next two years, citing softer recent growth and weaker global outlook, but expects the country to retain its place as the fastest growing major economy.

According to IMF estimates, India’s economy grew 7.1% in FY19 and is expected to accelerate to 7.3% growth this fiscal and to 7.5% in FY21. All the estimates are 0.2 percentage points less than its previous assessment in January.

The IMF numbers are higher than those of the Reserve Bank of India, which had last week cut its growth forecast to 7.2% for this fiscal and 7.4% for FY21.

In its flagship World Economic Outlook released in Washington, IMF said the reduction in India’s estimate is on account of the “the recent revision to the national account statistics that indicated somewhat softer underlying momentum”.

It has suggested reforms to hiring and dismissal regulations to help incentivise job creation and absorb the country’s large demographic dividend.

According to India’s official estimates, Indian economy grew 7% in FY19, slowest in the last five years. IMF expects growth to recover in the current fiscal and the next.

“In India, growth is projected to pick up to 7.3% in 2019 and 7.5% in 2020, supported by the continued recovery of investment and robust consumption amid a more expansionary stance of monetary policy and some expected impetus from fiscal policy,” the WEO noted.

Over the medium term, the multilateral institution expects growth to stabilise at just under 7.75%, based on continued implementation of structural reforms and easing of infrastructure bottlenecks.

It expects inflation to remain below the Reserve Bank of India’s threshold of 4% in the current fiscal at 3.9% and marginally exceed at 4.2% next year. Current account deficit is seen at around 2.5% of GDP.

Could India end the current fiscal a $3 trillion economy? According to IMF’s October 2018 data, FY20 GDP is seen at $2.958 trillion, adjusting for revisions it should be slightly short. However, India’s own assessment presented in the budget sees GDP at ₹210 trillion, which translates to slightly more than $3 trillion.

India received $79 million in remittances from its diaspora in 2018 possibly due to financial help following the Kerala floods, the World Bank said. India was followed by China at $67 billion, Mexico $36 billion and the Philippines $34 billion. “Remittances grew by more than 14% in India, where a flooding disaster in Kerala likely boosted the financial help that migrants sent to families,” the bank said. India’s remittances had increased from $62.7 billion in 2016 to $65.3 billion 2017.