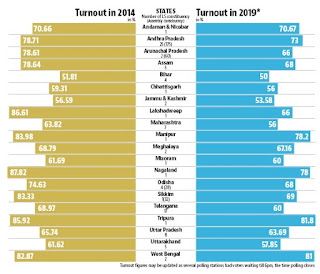 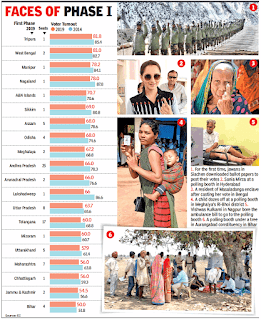 The 17th Lok Sabha polls got off to an intense start with turnout largely remaining the same as 2014, though there were “sporadic incidents” of violence in the three hotly contested areas – western Uttar Pradesh, northern districts of West Bengal and Andhra Pradesh.

In UP and Bengal, the stakes are high for BJP while in Andhra, it’s a high-pitched contest between two regional parties — Telugu Desam and YSR Congress — as assembly elections are taking place along with Lok Sabha polls.

While two deaths were reported in AP, incidents of violence were reported from Kairana in UP and Cooch Behar in Bengal. In Vidarbha, where naxalite-related violence was reported from Gadchiroli, turnout was expected to be a shade below 2014. Voting in four seats in Gadchiroli’s Aheri will be held later as polling staff could not reach booths on time.

In two North Bengal constituencies — Cooch Behar and Alipurduar — the polling was high at 81% until 5 pm. Apart from a few sporadic incidents of intimidating voters in some areas in Cooch Behar, local EC officials said polling was largely peaceful in these constituencies.

Both these constituencies are among those the BJP hopes to wrest from the Trinamool Congress.  As a result, there were constant trading of allegations with the TMC complaining of EVMs malfunctioning and the BJP alleging violence.

The Election Commission later said there were “sporadic incidents of violence” in some areas in which at least 15 cases of EVM damage were reported, of which six were in Andhra Pradesh and five in Arunachal Pradesh.

Elections in Baramulla area of Jammu and Kashmir witnessed more than 33% turnout, which is considered high despite a ban call by the Hizbul Mujahideen. Similarly, Naxal-hit Bastar area of the Chhattisgarh recorded 56% polling. While the exact data was still being collated, the turnout was not being seen as indicative of any trend. The incidents of violence, however, are being viewed as an indicator of the nature of contest. The BJP, which had swept the first phase of the UP elections in 2014, was at tenterhooks as the Mahagathbandhan combined its energies on the ground.

In all, 91 seats went to polls on Thursday of which a considerable focus was on Telangana and Andhra Pradesh, where voting took place for all 42 Lok Sabha seats besides Andhra Pradesh assembly elections. Andhra chief minister and TDP president N Chandrababu Naidu aired concerns over violence and technical snags in EVMs.

While the polling percentage stood at around 70% by 5 pm, election commission officials were expecting the overall voting percentage to cross 80% by the time the voting was completed with lakhs of voters still standing in queues having returned to polling booths in the evening.

TDP Supremo Naidu met the chief electoral officer Gopala Krishna Dwivedi in the evening and appealed to him to extend the polling time in the booths where the voting was delayed by 4-5 hours owing to technical snags involving EVMs.

The polls in Andhra assume significance as TDP, which contested 2014 in alliance with BJP and shared power at the Centre, had pulled out of the NDA government last April and is contesting without any tieup.

TDP, which won 15 Lok Sabha and 102 Assembly seats in 2014 polls, is hoping that actor-turned-politician Pawan Kalyan’s Janasena party will split the anti-incumbency votes in their favour.

As against this, the Opposition YSRCP is pinning its hopes on the widespread anti-incumbency at the grassroots level owing to the alleged corruption of Janma Bhoomi advisory committees controlled by the ruling dispensation. TDP won the 2014 polls by a slender margin of 0.4%.