Fuel prices set to shoot up 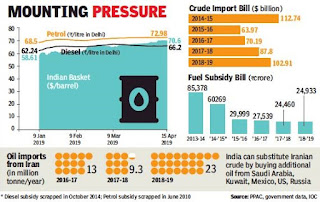 The Donald Trump administration put India in a tight energy fix and strategic tangle, ending the waiver that allowed New Delhi to buy Iranian oil even as it whittled down supplies from Tehran, a long-term source and partner in the region.

“The current waivers expire on May 2. There are no SRE (significant reduction exemption) waivers that extend beyond May 2. Full stop,” US secretary of state Mike Pompeo announced at a state department briefing on Monday, signalling an end to a nearly year-long breathing room the Trump administration had given to eight countries, including India and China, after putting them on notice to stop buying Iranian oil.

Any action or entity interacting with Iran should do its due diligence and err on the side of caution,” Pompeo warned, adding, “We will no longer grant exemptions. We’re going to zero across the board.” Entities that continue to trade with Iran will invite US sanctions. Other countries that also lost the waiver are all American allies—Japan, South Korea, Italy, Greece, Turkey and Taiwan.

The US action will make life harder for consumers in India by pushing up fuel prices and squeezing the new government’s legroom for social spending. Government officials said they were “studying the implications of the announcement and the government will make a statement at an appropriate time”.

India depends on imports for 82% of its oil needs, and Iran is among its top five suppliers. But senior executives of state-run oil companies, the main importers of Iranian oil, said that alternate sources had been identified. They said Indian refiners have lined up ‘optional volumes’—quantities in addition to term contract volumes-—from Saudi Arabia, Kuwait, Mexico and the US to substitute shipments from Iran, which supplied over 23 million tonnes in 2018-19.

It is on the pricing side that India will feel the impact. Global benchmark Brent crude spiked nearly 3% to $74/barrel on Monday, the highest since November 2018. Reports suggest the latest US move will suck out nearly 1 million barrels a day from the global market.