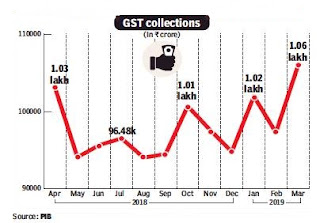 GST collection in March crossed the Rs.1 lakh crore mark, the highest since the tax reform measure was rolled out in July 2017, bringing relief for the government battling sluggish receipts.

The rebound in GST revenues comes against the backdrop of robust receipts on the direct tax front, with tax officials expressing confidence about meeting the 2018-19 target. They said receipts will keep flowing in till middle of the month and a final picture would be available by then.

The GST revenue in March 2019 showed a growth rate of 15.6% over the receipts in the same month last year.