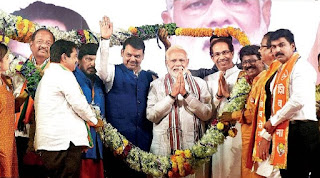 In his rally at the MMRDA ground in BKC, Prime Minister Narendra Modi wooed the middle class by calling it the backbone of the country. Be it in giving up LPG subsidy or paying taxes, Modi highlighted the positive role played by this class even as he targeted the Congress for never recognising these contributions. He called Rahul Gandhi greedy and selfish.

“On my appeal, more than 1 crore people gave up LPG subsidy and more than 40 lakh senior citizens gave up their rail fare subsidy. In the last one year, it is the middle class that has been at the forefront in donating blood, eyes and cadaver to medical schools,” he pointed out.

He further said, “It was unprecedented that Finance minister Arun Jaitley thanked taxpayers in his Budget speech because the Congress has never spared a thought about the welfare of the common man.”

He said, “If Mumbai police had not responded bravely on 26/11, many more lives would have been lost.”

“There has been demand for a police memorial by our police forces for the last 50 years but Congress and other governments never paid any heed to it. But my government completed a grand memorial for the country’s police in Delhi within five years,” Modi claimed.

“After terrorist attacks Congress only changed home ministers and chief ministers but no political will was shown to bring the perpetrators to justice, which my government did. God forbid, if there is any terror attack on our country, we will flush the terrorists out even if they are hiding in patal (hell).”

Speaking on the occasion, Sena president Uddhav Thackeray said, “We decided to have an alliance with the BJP only on the issue of Hindutva. Modi government has the courage to teach Pakistan a lesson. If we come to power, we will ensure there is Ram Mandir in Ayodhya and Article 370 is dropped from the constitution.”

Speaking at the rally, chief minister Devendra Fadnavis said, “The issue of national security is as important as development and we will win elections for both these aspects.”

There was high security at BKC for PM Narendra Modi’s rally and no black cloth, including bags, T-shirt, shirts were allowed inside the ground. 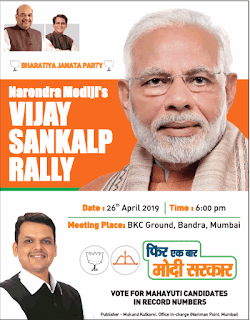