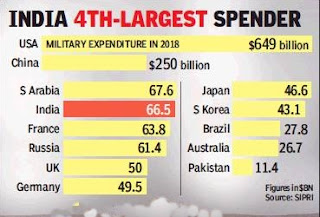 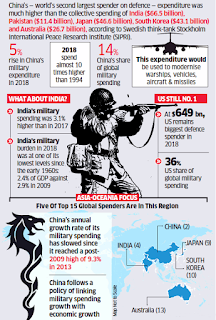 Though Sipri does not go into details, the $66.5 billion (Rs.4.6 lakh crore) military expenditure figure for India includes defence pensions, which amount to one-fourth of the total. Of the remaining, two-thirds go in for the day-today running costs, salaries and the like for maintaining the almost 15-lakh strong Indian armed forces.

Overall, this leaves just about one-fourth of the $66.5 billion figure for military modernisation and new weapon systems. So, despite India being the world’s fourth largest spender by displacing even Russia ($61.4 billion), its armed forces continue to suffer from critical shortages on several fronts.

China, which has registered a defence budget hike for the 24th consecutive year, of course, wants to rival the US on the global stage and prevent its military intervention in the Taiwan Strait and the South China Sea.

India, however, has no option but to be ready for its expansionist behaviour both along the 4,057-km Line of Actual Control as well as the Indian Ocean Region.