Ahmedabad-Mumbai Tejas Exp to be flagged off today 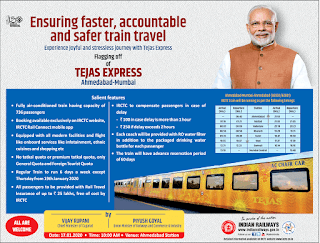 The second Ahmedabad-Mumbai Tejas express will be flagged off by the Union railway and commerce minister Piyush Goyal and Gujarat chief minister, Vijay Rupani from Ahmedabad today. It will run simultaneously in the opposite direction to Shatabdi express. The commercial run of the train will start from Sunday from Ahmedabad, the railways said.

The Tejas Express will be operated by the Indian Railway Catering and Tourism Corporation.  The air-conditioned train will run six days a week, except on Thursdays. According to schedule, the train will leave Ahmedabad at 6.40 am and reach Mumbai Central railway station at 1.10 pm., covering the entire distance of 533 km in 6 hours and 30 minutes.

The train will have six halts including Nadiad, Vadodara, Bharuch, Surat, Vapi and Borivali. On its return journey, the train will leave Mumbai Central at 3.40 pm and reach Ahmedabad at 9.55 pm. In October, the IRCTC started the first Tejas Express between Lucknow and New Delhi.

Th train fare will be dynamic keeping in consideration the prevailing bus, taxi, rail and airfares. Train fares will be on point-to-point basis. Current bookings will be available after preparation of first chart, which will normally be between four hours before and up to five minutes before the scheduled departure of the train.

All passengers travelling on the IRCTC train will get rail travel insurance of up to Rs.25 lakh free of extra cost. This complimentary travel insurance also includes an exclusive coverage of Rs. 1 lakh against theft or robbery during the travel period of the passengers.