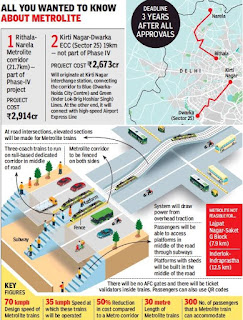 Delhi Metro Rail Corporation has submitted detailed project reports for the two proposed Metrolite corridors — Rithala to Narela (21.7 km) and Kirti Nagar to Dwarka ECC (Exhibition-cum-Convention Centre) in Sector 25 (19 km) — to Delhi government for approval. After getting a nod from the government and the Centre, DMRC expects to complete the two projects within three years. The Rithala-Narela corridor is expected to come up first.

Unlike metro corridors, Metrolite will be a light rail project that will mostly run on road surface. However, unlike similar projects in other cities around the world that share road space with other modes of transport, the Rithala-Narela and Kirti Nagar-Dwarka ECC Metrolite corridors will have dedicated corridors that are fenced on both sides. DMRC has gone for dedicated, fenced corridors as sharing road space with other vehicles would have reduced the train’s average speed considerably.

While it was earlier expected that apart from the Rithala-Narela section, two other proposed Phase-IV corridors of Delhi Metro — Lajpat Nagar-Saket G Block (7.9 km) and Inderlok-Indraprastha (12.5 km) — would also get Metrolite corridors, these have not been found feasible and will have metro services. DMRC found out that on both the Lajpat Nagar-Saket G Block and Inderlok-Indraprastha corridors, Metrolite wouldn’t be able to handle the expected passenger traffic.

According to Delhi government officials, the Rithala-Narela Metrolite project will cost Rs.2,914 crore, out of which Delhi Development Authority is expected to provide Rs.200 crore as the corridor will provide some much-needed connectivity to its Narela sub-city. Apart from Narela and different sectors of Rohini, the corridor will also pass through areas like Bawana, Puth Khurd, Sanoth, Bhorgarh and Anaj Mandi. Sources said that unlike metro systems, which are more capital intensive, Metrolite has simpler infrastructure, which brings down the cost. As the corridor will run mostly on roads, the cost that could be incurred for elevated or underground corridors will not be included.

The Kirti Nagar-Dwarka ECC Metrolite corridor is not part of DMRC’s Phase-IV project, but a standalone corridor will originate from the Kirti Nagar interchange station, connecting the corridor to the Blue (Dwarka-Noida City Centre) and Green (Inder Lok-Brig Hoshiar Singh) lines. On the other end, the corridor will be connected to the high-speed Airport Express Line, which is being extended from Dwarka Sector 21 to Dwarka ECC in Sector 25. The project cost of the second corridor is Rs.2,673 crore and apart from Kirti Nagar and different sectors of Dwarka, it will pass through areas like Saraswati Garden, Mayapuri, Hari Nagar, Shiv Puri, Dabri, Sitapuri Extension, Mahavir Enclave and Dhool Siras Village.

A Metrolite train, which will have three-coach sets and will comfortably accommodate 300 passengers at a time, will be sufficient to handle the passenger traffic on this route. As per DMRC’s DPR, two sets could be joined to make a six-coach train in case of increased demand. The system will draw power from overhead traction.

Even though the corridors are yet to receive Delhi government or the Centre’s approval, DMRC has initiated the process of procuring 22 Metrolite coaches for the Kirti Nagar-Dwarka ECC corridor to save time. DMRC will rope in a firm that will design, manufacture, supply, test and commission the Metrolite trains, apart from providing comprehensive maintenance up to 15 years for the standard gauge trains and a train depot.